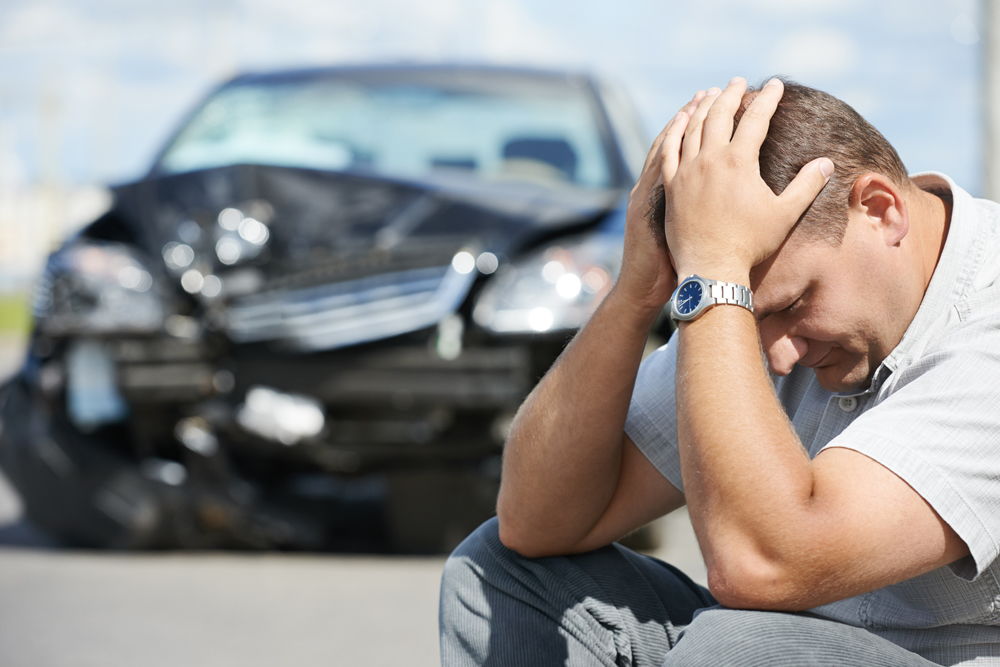 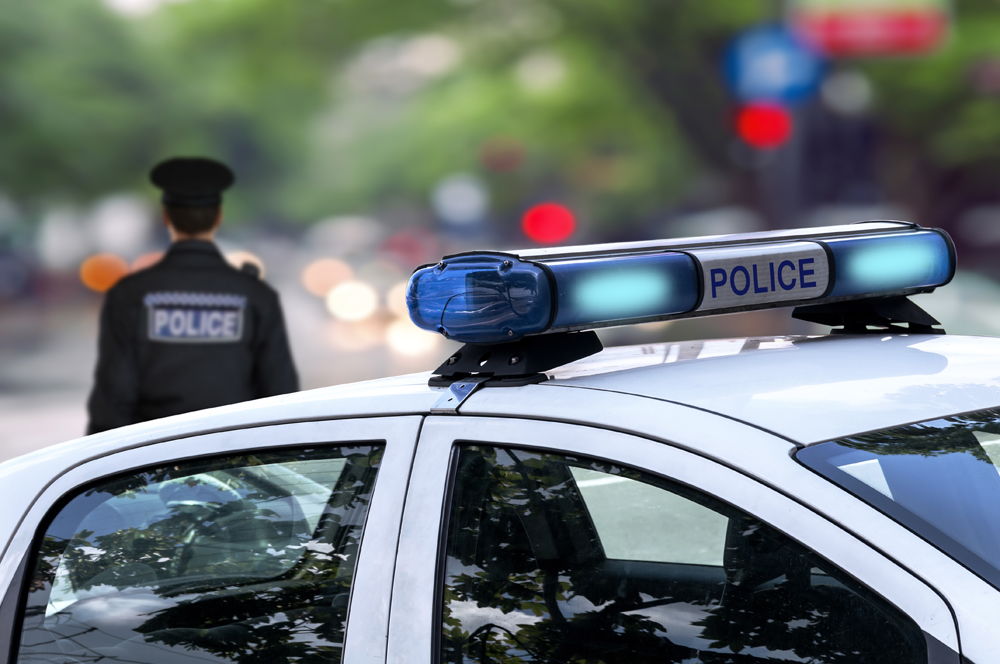 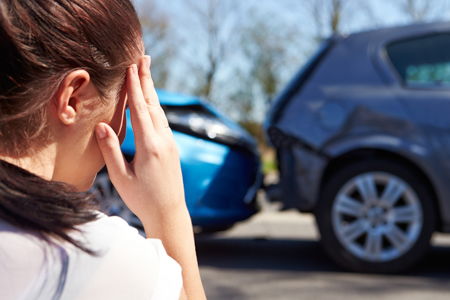 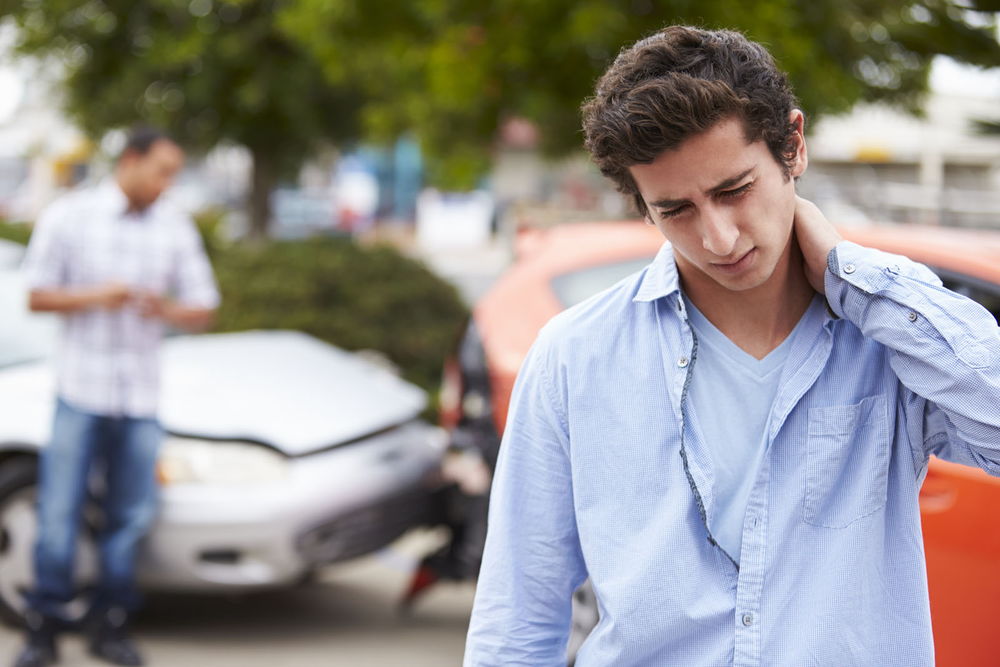 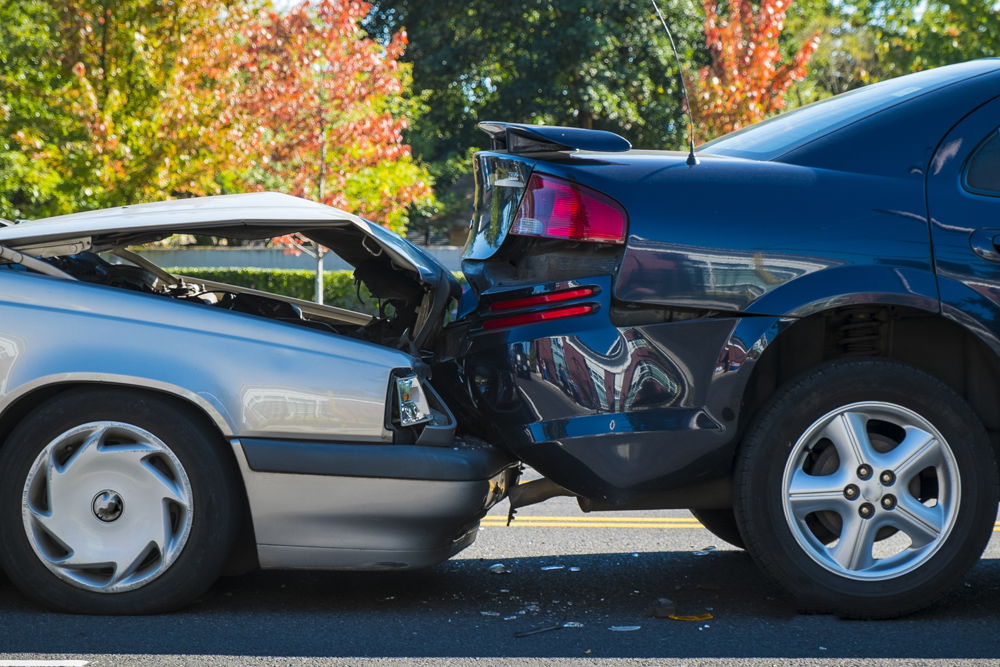 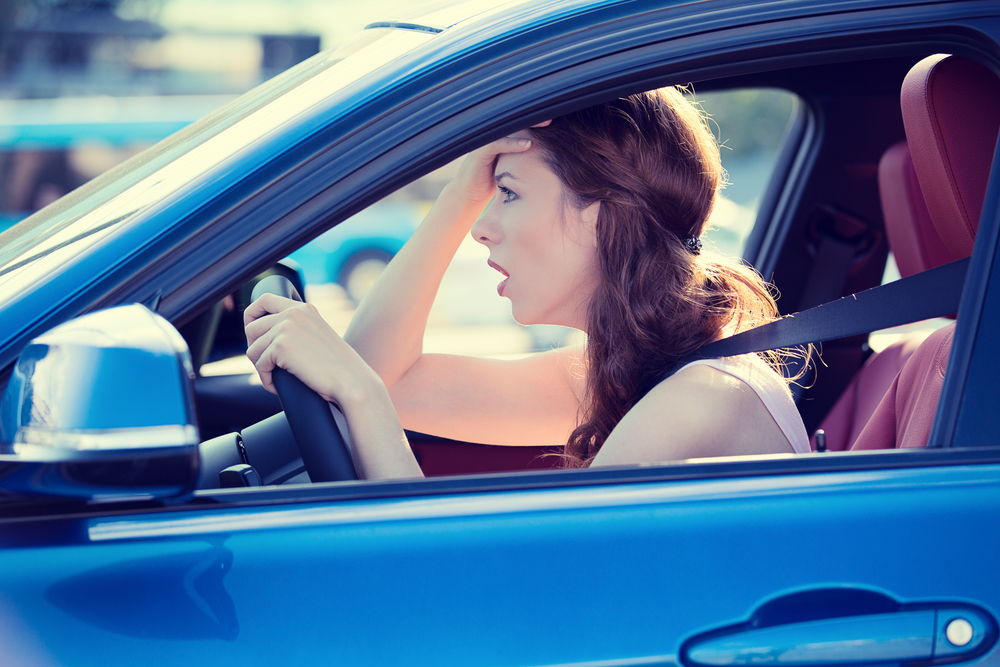 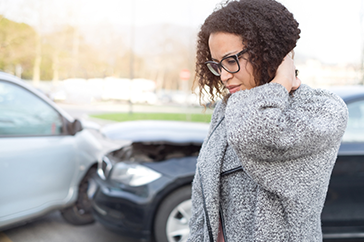 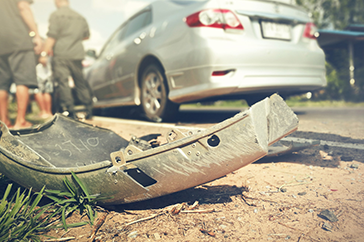 How injuries occur in a motor vehicle accident...

Frontal crashes In frontal crashes, drivers and passengers can be injured by striking some part of the car's interior, as in the case of an unbelted occupant, from intrusions into the occupant compartment by other objects or vehicles, or from their seat belt/shoulder harness or airbag. Frontal crashes at lower to moderate speeds are highly survivable when properly using restraints because the front portions of passenger vehicles are crumple zones which allow a significant amount of ride down which increases the duration of the crash and reduces the acceleration-induced loads to the occupants. However, when these restraints are not worn, the results of such a crash are predicted by Newton's first law of motion. An object in motion will remain in motion unless acted upon by an outside force. So, in a 25 mph collision, when your car strikes an immovable object and stops, your body will continue forward at 25 mph until it is acted upon by your car's interior parts.

Seatbelt and shoulder harness webbing are designed to hold you safely in your seat and away from steering wheels, dashboards, and windshields. And, under significant loading, they will stretch a small amount, allowing additional ride down. Padded knee bolsters provide ride down if the knee strikes them, and even the seat can provide a degree of ride down. In spite of this, however, even in low speed crashes, whiplash-type injuries do occur in frontal crashes, largely as a result of the forward momentum of the head which results in an acute bending moment and shear in the lower cervical spine. So, while more serious injury and death may be prevented, whiplash is still a possibility.

In higher speed frontal crashes, even when seatbelts and shoulder harnesses and airbag function properly, the head, chest, and abdominal loads may exceed the compliance of human tissues resulting in rib or sternal fractures, organ lacerations or ruptures, tearing of the major vessels of the chest, spinal fracture/dislocation, and severe brain injury.
Rib fracture patterns vary depending on whether an airbag deploys or not and provides some insight into injury mechanics. It is also clear that age plays an important role in the risks for chest injury.

The findings of recent research are consistent with earlier research which has underscored the significance of the relative frailty of the aging population and their heightened risk for chest trauma in frontal crashes. With aging, the thoracic cage becomes weaker through osteoporosis and this risk is compounded with a diminished muscle mass and voluntary strength, as well as the potential effects of somewhat reduced reflexes. Restraint webbing loads can concentrate forces to the point of fracture of ribs along belt lines. Airbags (in the absence of belt use) generally produce fracture patterns along the posterior axillary line (an imaginary line that runs down from the rear of the armpit).

Because of the aging baby boomer population, within half a dozen years or so, nearly one in four persons will be aged 65 years or older. New ATDs are being built to represent the 60-year-old driver. Among other things, they will have significantly kyphotic thoracic spines and weaker ribs. Proposed modifications of our current arsenal of safety equipment include a better implementation of pretensioners, the use of load limiters in restraint systems, and more sophisticated airbag deployment strategies. These systems could be regulated automatically for drivers based on age, height, weight, etc., by using a signal sent from key-card IDs as the driver enters the vehicle. Another proposal is the adoption of a four-point restraint.

By increasing the width of webbing or by increasing the number of straps, restraint loads can be better distributed in order to mitigate injury in higher speed crashes. Experiments have shown that a V-type system across the chest, similar to the current style of race car drivers, is preferable to an X-type system.

THE SPINE RESEARCH INSTITUTE OF SAN DIEGO SUPPORTS RESEARCH FOR THE IMPROVEMENT IN RESTRAINT SYSTEMS, BUT URGES CAUTION IN THE ADOPTION OF SYSTEMS WHICH MIGHT BE LESS CONVENIENT TO USE OR MORE INTRUSIVE, SINCE THESE FACTORS MIGHT ALSO HAVE A NEGATIVE EFFECT ON USE RATES.

Side impact crashes As noted above, side impact collisions are particularly dangerous because the driver or passenger has little in the way of structural protection in the event of a near-side impact. Seat backs, shoulder harnesses, and head restraints offer little protection in these crashes. Side airbags, which may be mounted in the B-pillar, overhead, or the seat back itself, provide some measure of protection in side impact crashes. In more severe crashes, the primary risk is to thoracic and abdominal viscera, as well as to the head. In lower severity crashes, lower back injuries are common, as are neck injuries. However, neck injury tends to be mitigated to some degree since, unlike a rear impact scenario, the torso is capable of moving laterally and sharing the load imparted to the whole spine. Lower back injuries, on the other hand, are somewhat more common because the subject's body mass and lap belt anchor the pelvis as the torso flexes laterally resulting in shear and bending moments in the lumbosacral disc and facet region.

Rear impact crashes So far we've looked at improved mathematical models (MADYMO), animal studies, state of the art ATDs (RID2 and BioRID II), cadaver specimen crash tests (PMHS), and, of course, full scale human volunteer crash tests employing sleds in some cases, and real vehicles in others. From all of this work we can effectively reconstruct an accurate sequence of events in a typical LOSRIC, without the cumbersome and tedious citing of specific references. The following is thus a composite of all of the relevant literature, relying heavily on our own crash test data. Bear in mind, of course, that special risk variables can significantly alter the kinematic response to CAD trauma. And this model is based on an ideally positioned occupant, in a relatively good state of health, looking straight forward, wearing restraint belts, using a head restraint, and seated in a standard car seat and in a car struck squarely from the rear (180 degrees) with good bumper alignment (i.e., no over-ride or under-ride, and no offset), free runout (i.e., no second collisions). The model is also applicable to speed changes of about 2.5 mph to 6 mph.

Upon impact, the target vehicle begins to move forward into the occupant, making contact chiefly through the seat back. In accordance with Newton's 1st law of motion, the occupant's inertia resists this motion. As the seat back continues to move forward, the occupant must yield. Initially, the thoracic curve is flattened by the seat back. This results in a vertical compressive force which is transmitted through the spine. So far, we have not been able to determine to what degree-if any-the lumbar spine also flattens. As the vertical compressive force (-z) continues up the spine, some rise of the torso also occurs. This is called ramping and is halted after 1-3 inches of vertical displacement, usually because of the restraining effect of the seat belt and the weight of the torso. Meanwhile, as the torso now is undergoing both a -z acceleration vertically and a forward x linear acceleration, the head-also acting in accordance with Newton's 1st law of motion-resists this motion. As the vertical force extends upwards into the neck it initiates flexion of the upper cervical motion segments and hyperextension of the lower segments. Compression then quickly gives way to tension as the upward moving head and now downward moving torso attempt to disengage. Also, as the torso moves forward with respect to the head, significant amounts of horizontal shear force occur in the neck roughly parallel to the facet joint line. As this is initiated under conditions of compression, the overall stiffness of the neck may be diminished as a result of ligamentous slack, offering less resistance to shear.

As the torso continues to move forward, the neck begins to pull the head along with it. This has the effect of further flexing the upper cervical spine and hyperextending the lower cervical spine (primarily the C5-6 segments) and the spine assumes an S-shaped configuration The head also is induced to extend along with the neck as the head takes up the backset distance during the head lag phase. Depending on specific head restraint geometry (occupant's position relative to the restraint), head restraint contact will usually occur in about 100 msec (i.e., one tenth of a second), at which time head translational acceleration will peak. Any stored energy in the seat back from its deflection (usually about 5-15 degrees) will be released as the occupant begins to move forward into the re-entry phase. This effectively increases the torso and head speed (overspeed) over that of the torso.

As this change of phase occurs, the direction of horizontal shear reverses rapidly and the rearward bending moment (My) quickly gives way to a forward bending moment (-My). Depending on the initial position of the occupant with respect to safety harnesses, the lap and shoulder portions will eventually restrain the forward moving torso which will effectively aggravate the neck's bending moment since the forward moving head's inertia again is behaving in accordance with Newton's 1st law of motion-this time in the forward (x) direction with some angular momentum and acceleration.

Thus, it is likely that in many instances injury occurs in the initial phase as a result of head lag, compression/tension, and shear effects along joint lines. Lower cervical hyperextension during the S-shaped phase is also likely to be associated with injury. Global hyperextension of the neck can occur, depending on head restraint geometry, but we and other researchers have produced injuries in volunteers well within the normal physiological range of motion of the neck. It is also possible that further injury can occur during the forward phase, and this is somewhat more likely in females (and small males) because of their lower inertia and higher resulting acceleration. It should be pointed out that second collisions may also aggravate this second phase by imposing additional decelerative effects and accentuating neck bending moments and shear forces.

Note: This information was taken from the Spine Research Institute of San Diego's website.